What is Non-Homogenized or Cream-Top Milk?

Usually when people buy milk today, it is one consistent texture, color, and creaminess. In other words, it is homogenous. However, this was not always the case. Through the early 20th century, a layer of cream at the top of whole milk was the standard. This is because a cow produces milk with two main components: non-fat milk and cream. Left to their own devices, the non-fat milk will settle, and the cream will naturally rise to the top.

Cream-top or creamline milk, also called non-homogenized milk, was the norm until paper milk cartons started to replace glass bottles. After World War II, more people began to move into suburban areas. Grocery stores became more prevalent, making it easier to buy everything all in one place. Convenience and cost resulted in glass milk bottles being replaced by paper cartons and plastic containers. By the 1950s, almost all milk in the United States was packaged in square cartons.

When consumers first saw homogenized milk, they responded with some skepticism since they were used to seeing cream at the top of their milk. Paper cartons prevented people from seeing the consistency of the drink inside, so overtime consumers adjusted, became less suspicious, and homogenized milk became standard.

There’s no reason to be skeptical, though. Homogenization is simply a mechanical process that breaks up the fat globules in milk so that they stay evenly dispersed and suspended in the milk. Essentially, the milk is heated, agitated, and pushed through a membrane or screen at pressures of 4,000 pounds per square inch to break up the cream. There are no chemicals involved, and homogenization does not change the natural nutritive qualities of milk. It simply makes drinking milk more convenient because you don’t have to shake up the bottle to distribute the cream before drinking. Additionally, the filtration part of the process makes it very easy to remove a certain percentage of fat to produce varieties such as 2 percent, 1 percent, and skim.

While cream-top milk may seem like a thing of the past, there are farms that offer the product. Like the milkman, it’s making a bit of a resurgence here in New England. 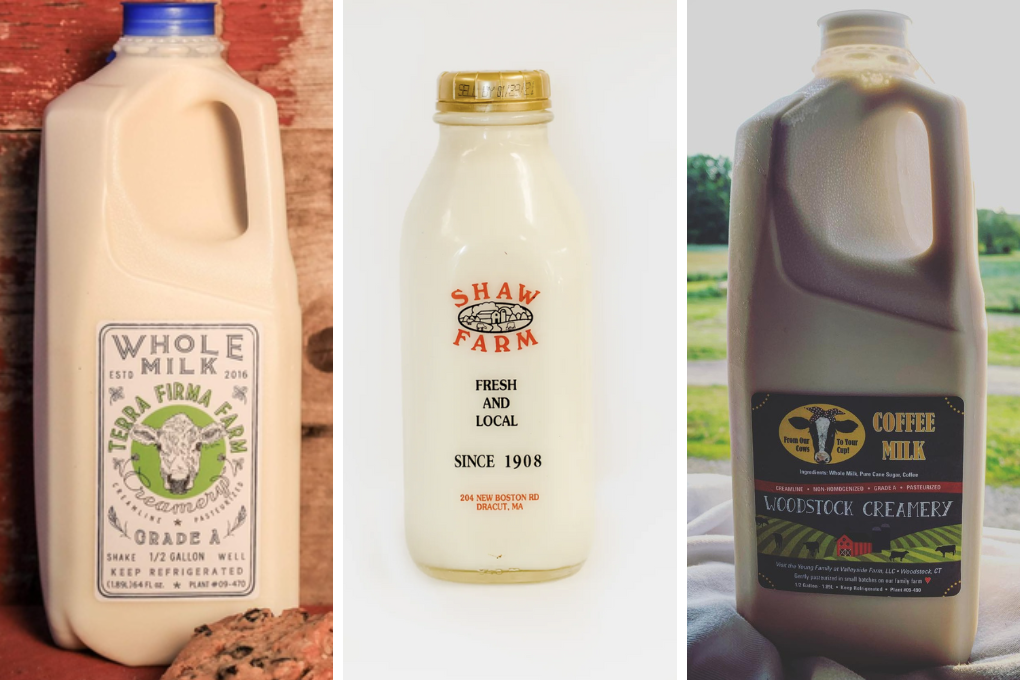 If you’re looking to buy pasteurized, non-homogenized milk (cream-top milk), below is a list of farms in New England that have this product:

*Reach out to us if there is someone who offers pasteurized, non-homogenized milk in New England that we should add to this list. Cottage cheese is one of the most useful and versatile cheeses. It's also one of New England's oldest cheeses. Learn about its nutritional benefits and... Q&A with a Vermont Dairy Farmer: Animal Comfort and Winterizing the Farm

Dairy farming is a 365-day-a-year job. We chat with a Vermont dairy farmer about animal comfort and winterizing the farm for New England winter weather. January 11th is National Milk Day. On this day in 1878, many people believe milk was first delivered to people in glass bottles. Find out...